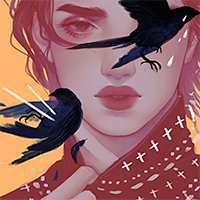 And back alone he was.

Not that it ever mattered. The difference was paper thin, so thin that it made none at all. He had always felt this way, after all. Alone, yet surrounded by people. Surrounded by people, yet alone. It didn't matter. After that short encounter with the boy with the beeping machine on his wrist, life went back to how it had always been. He did see the little girl again, the one he should have killed faster, when she was still alive. It would have been a quick and painless death. He didn't feel remorse, though, when he saw her there, encircled by those rotting creatures as if she was being protected by them. Her eyes were not quite the same as what he remembered them to be. Her ripped clothes were bloody, barely covering the insides hanging out of her stomach. That had been her choice. So he left her like this, because that was her decision, and he respected that. He wasn't going to decide for her. He couldn't even decide for himself. It was all a matter of surviving in the end, and she was not compromising his life. Not that he had anything to do with it, but humans work in a very funny way when it comes to life and death. He had no reason to live, but he had no reason to die either. It was as simple as that ; and so life went on. A long neverending day filled with small unmeaningful events. Walk, stop, hide, smoke, eat, sleep, and then go back to first step and repeat until dead. Or, until you run out of cigarettes because you lost your pack again.

So here he was again. In a supermarket, bazooka on his shoulder in a nonchalant way, his last chunk of cigarette holding loosely between his lips. It was actually a good thing. He was running out of ramens as well.

En ligne
Re: Бог дал, Бог и взял.Jeu 25 Aoû 2016, 16:54
Would have been a little too accomodating if he had them. Hot meal, shower, place to sleep, more convenient than this and a halo would suddenly appear above his head. He shook it. Canned tuna and ramens were the only "on the go" food he had, and eating those while walking wasn't exactly practical.

En ligne
Re: Бог дал, Бог и взял.Sam 17 Sep 2016, 21:18
Crushing the cigarette he had lit under his foot, he grabbed the bags and walked to the window. There was no rope anymore but he had made one out of sheet while Jem was asleep, so he threw it out after securing it inside, then went down first, jumping next to the corpse of his weapon. He could take it back and repair it, but carrying this with everything else would slow them down even more.

En ligne
Re: Бог дал, Бог и взял.Dim 18 Sep 2016, 14:35
Glad that he didn't have to repeat that, Jem took the lead. Their surroundings seemed calm. But they always did. If you woke up out of a coma and hadn't seen Vannstad in the past two years, this would seem just like a regular morning. Well, except for the cars that blocked the roads, the ransacked stores and the corpses around every corner. But if you woke up in your bed and hadn't looked outside yet, this could've been one of those peaceful mornings. Birds singing, the wind rustling through the leaves of nearby trees, and the calmness before the storm. This way.

En ligne
Re: Бог дал, Бог и взял.Lun 10 Oct 2016, 18:56
He followed, not even wondering for the slightest where this flow would bring him. The wind felt good on his skin. The chipping birds reminded him life was omniscient. Shifting and fleeting, but always somehow making its way through the ravages of the universe. Today wouldn't be a good day ; it would be one like any others, neither good nor bad. Or at least, that's what he thought.

HRP:
Ugh, Evans. Such a hippie.

Neither good or bad? You're kidding right? Everyday felt like waking up in a nightmare to Jem. This was not "living". This was no "life". This was survival. Surviving isn't fun. It's a shit hole. Every goddamn day you did things you couldn't linger on. The human mind wasn't made to process that kind of shit. Process it and you're lost. Process it, and you're dead. Can you hack cars? Jumpstart them? Whatever the term is. "Make them work without keys".

En ligne
Re: Бог дал, Бог и взял.Mer 26 Oct 2016, 19:48
You had 3 major types of people useful in an apocalypse. One, the doctor. Surprising just how fast a small flu can turn out deadly if left untreatened. Second, the ex-military. Quick thinker, survival-trained and handy to have when it comes to combat against an army of undead. Third category was all of the others who weren't doctors or military, but had in their possession a handful of practical skills that were unexceptional before but quite the lifesaver now. Evans was neither the first nor the second, and maybe not even the third, but he was an ex-inmate and had knowledge in mechanic so he could at least "hack a car". We need to find one with gasoline.

En ligne
Re: Бог дал, Бог и взял.Jeu 27 Oct 2016, 23:54
That's easy. Cars with gasoline were still out and about. A city full of zombies tended to do that. The major problem was finding one that was accessible. When people had fled their cars in a moment of panic, they had unfortunately left their cars in the middle of the road. Most streets were blocked. That's when Jem spotted their salvation in the midst of car madness. A motorbike. They could easily siphon gasoline into the machine AND avoid the never-ending traffic. Jem didn't believe in fate, but he had to admit this was almost too good to be true. There !

En ligne
Re: Бог дал, Бог и взял.Jeu 03 Nov 2016, 20:18
He looked up at the motorbike. He had never rode one before, but there was always a first time for everything, as they said. Shouldn't be too complicated ; Alisa had one of those scooters, bright yellow if he wasn't mistaken, and a matching helmet she would forget half of the time. One time, she had asked him to drive around with it just for the laugh - but never asked again as there's nothing more dull than to try making fun of someone who can't feel embarrassment. Good, he said, starting to walk towards it. With some more luck the tank was full.

En ligne
Re: Бог дал, Бог и взял.Ven 04 Nov 2016, 10:48
Considering it seemed to have been abandoned in mid-escape, Jem suspected it was. He had never driven one of these bad boys (= as Noah would say) before, but it couldn't be very hard if every teenager was able to get a license for it. You drive. He still said, putting all the responsibility on Mr. Pokerface.

En ligne
Re: Бог дал, Бог и взял.Jeu 10 Nov 2016, 18:07
It was fine with him (but then again, what wasn't ?). Walking his way to there, he glanced at the area because more often than not, these car gatherings were infested with dead people. Stuck inside, under, roaming around. Perfect set-up for a game of paintball, except this wasn't a game and it certainly wasn't paintball. Knowing that, he didn't jump when a hand suddenly tried to grab his ankle, simply moving away from it as the corpse was half crushed under a wheel.

En ligne
Re: Бог дал, Бог и взял.Lun 14 Nov 2016, 13:40
Hurry up, will you? Easy for him to say, standing there with his arms crossed defensively over his chest. Jem has absolutely no awareness of his own shitty demeanor. Or perhaps he simply stopped giving a fuck a long time ago.

En ligne
Re: Бог дал, Бог и взял.Dim 11 Déc 2016, 20:00
Réputation du message : 100% (1 vote)
He had no awareness of Jem's shitty demeanor either. Or maybe he, too, stopped giving a fuck. There was no point fighting it. From witnessing it first hand multiple times, if you raise your voice, someone is going to scream louder than you. The more you struggle, the more they enjoy it. He couldn't understand. Hang on tight. It would be a rough ride, no doubt. And without helmets too. The first acceleration almost threw him off, but it wasn't so much different than the scooter, in the end. Just faster and bigger. It would be fine. If the frail guy behind him had a good grip. He didn't want him to just fly away. (he's not that small, Evans...)
Page 5 sur 5 •